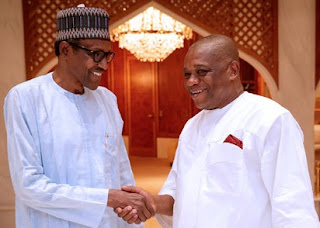 This was made known by the previous governor of Abia State while greeting acquaintances and followers at his home. Senator Kalu said he could not have disobeyed President Muhammadu Buhari and the National Working Committee (NWC) of the APC.

He said: “I won, APC won, President Buhari won, and Adams Oshiomole won,” adding, “I could have won the presidency of the Senate, but I won’t operate in harmony with the group.”

Speaking further, the legislator encouraged South Easterners to get engaged in Nigeria’s politics before the 2023 elections. “We are the nation’s salt and have the power to transform the tide. We just need to work together.

“Today and tomorrow we can face challenges, but we must not leave our future in the hands of others,” Kalu warned.
NewsToday recalls that Senator Ahmed Lawan and Senator Ovie Omo-Age respectively arose from the 9th National Assembly as Senate President and Deputy.