Connect with us
Advertisements
EFCC called for the petitions after a Nigerian asks
the commission to listen to 9ice ‘Living Things’ and go after everyone mentioned in the song. 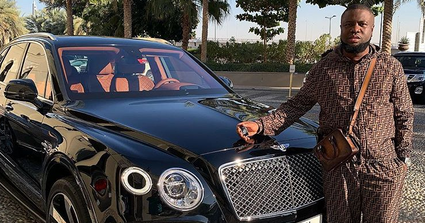 The Economic and Financial Crimes Commission (EFCC) has said that it will need petitions to go after Ray Hushpuppi, Baddyosha and every person Nigerian musician, 9ice mentioned in his song ‘Living Things.’
The EFCC was quoted saying this while replying to a tweet by one of it’s followers @onlydotcom on Friday, November 1, 2019.
The follower had asked the anti-crime agency to go after all the men 9ice mentioned in the song.
The follower tweeted,
“EFCC, sit down and listen to the song, Living Things, by 9ice and do your work with the fear of God. Nigeria will be better for it. ”
In the song, which was banned in 2016 by the National Broadcasting Commission (NBC) for promoting fraud, 9ice praised Ray Hushpuppi, Investor BJ, Baddy Osha, Opa6, Bayo Otunola and other social media celebrities, who have been accused of fraud.
9ice also mentioned Mompha, a popular Dubai-based Nigerian, known for flaunting his riches on social media.
News Today earlier reported that the commission recently arrested Ismaila Mustapha popularly known as Mompha for alleged internetbfraud and money laundering.
While Replying to @onlydotcom’s tweet, EFCC said a written statement would be needed to support any allegation against the social media celebrities.
READ ALSO: Download Naija Music Here 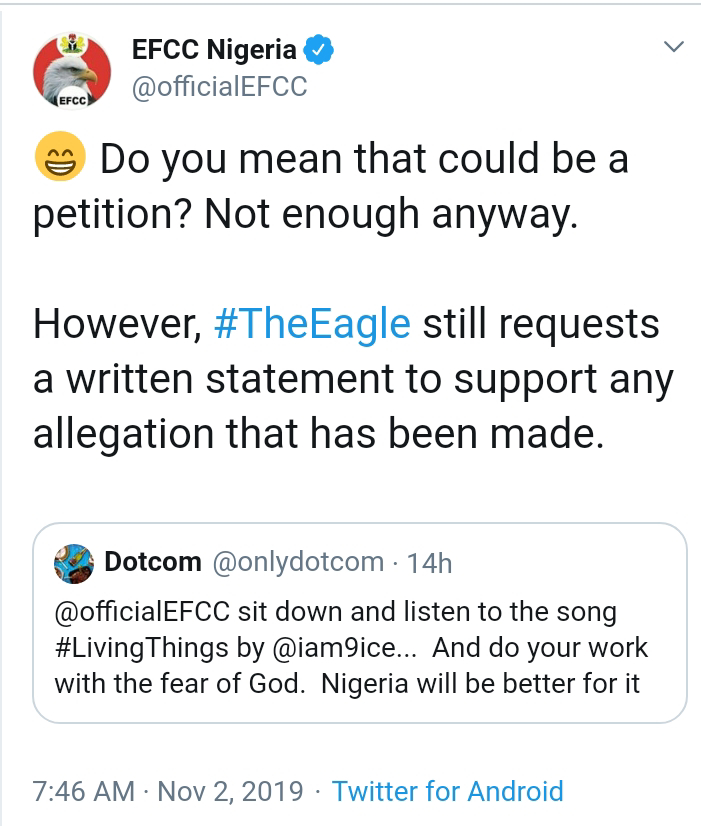 The anti-graft agency tweeted,
“Do you mean that (song) could be a petition? Not enough anyway.” However, the Eagle still requests a written statement to support any allegation
that has been made.”
Here’s a list of other social media celebrities mentioned in ‘Living Things’ by 9ice,
Jaguar
Cash Music
Lord BT
Nicky Baller
Olu JC
Junior White
Ugo
Wassup London
M. White
Don KC
Lati.